The State Department issued a statement offering $5 million as a reward for the capture of Venezuelan Samark López Bello for his involvement in transnational organized crime.

Find out why Florida will release millions of genetically modified mosquitoes

A new name has been added to the growing list of Venezuelans for whom the United States Government is offering a million-dollar reward. This time by Samark Lopez Bello accused of being part of international organized crime is offering up to $5 million for any information leading to his arrest and/or conviction.

Samark López Bello is a Venezuelan businessman and fugitive from U.S. justice, who accuses him of laundering drug money. In 2017, the U.S. Treasury Department singled him out as a front man for Tareck El Aissami, former Venezuelan vice president, who since June 2018 has been head of the Ministry of Industries and National Production. The businessman denies the accusations but not the link with El Aissami.

«We will work with the Justice Department to protect U.S. citizens from the illegitimate Maduro regime, while helping the Venezuelan people restore their democracy,» announced Pompeo in a message released on Twitter..

The reward offer is made under the Department of State’s Transnational Organized Crime Rewards Program (TOCRP).

According to the statement, with these actions, the United States demonstrates its commitment and a whole government approach aimed at combating transnational organized crime.

Statement from the Department of State

Today, the U.S. State Department announced a reward of up to $5 million for information leading to the arrest and/or conviction of Venezuelan citizen Samark José López Bello for involvement in transnational organized crime.

This offer is made in connection with the announcements of reward offers of up to $10 million for former Venezuelan Vice President Tareck Zaidan El-Aissami Maddah on March 26, 2020 and up to $5 million for the National Superintendent of Cryptomonies in the Maduro Joselit de la Trinidad regime. Ramirez Camacho on June 1, 2020. López Bello worked with others in an effort to violate and evade OFAC sanctions imposed under the Foreign Narcotics Liaison Designation Act and related regulations. He was charged, along with El-Aissami and Ramirez, in the Southern District of New York with various transnational crimes.

Today’s reward offer is being made under the Department of State’s Transnational Organized Crime Rewards Program (TOCRP). Along with the Narcotics Rewards Program, more than 75 major drug traffickers have been brought to justice since these programs began in 1986. The State Department has paid more than $130 million in rewards for information leading to these arrests.

Find out why Florida will release millions of genetically modified mosquitoes 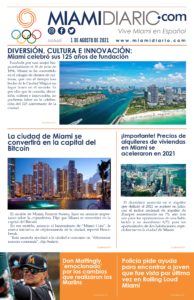