Until not long ago, Brian Lee Hitchens believed in the theories circulating on the Internet that the coronavirus pandemic is a hoax.

This Florida driver and his wife Erin shared social networking claims that SARS-CoV-2, the cause of COVID-19, is a manufactured virus that is related to 5G cell technology or just causes something similar to the flu.
So, they did not follow the recommendations to avoid contagion, nor did they seek help when they became ill in early May.

Although the man was able to recover, his wife of 46 years was not so lucky and was seriously hospitalized. She died a few days ago from heart problems related to COVID-19. 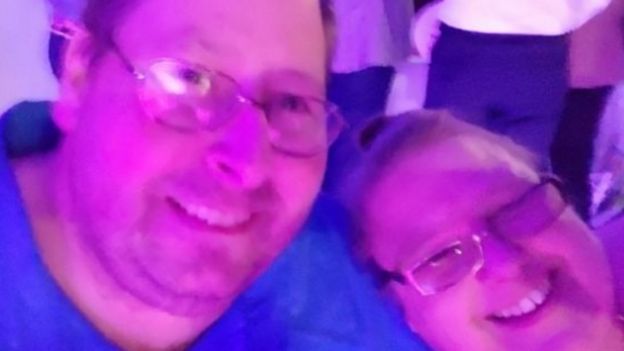 The BBC spoke to the man in July as part of an investigation into the human cost of coronavirus misinformation.
At the time, his wife was on a ventilator in the hospital.

Erin Hitchens, a pastor in Florida, had pre-existing health problems: she suffered from asthma and a sleep disorder.
Her husband explained that the couple did not follow the health recommendations at the beginning of the pandemic because they believed some theories about the origin of the coronavirus that they saw on the Internet.
Brian Hitchens continued to work as Uber’s driver and was in charge of delivering the medicines for his wife.
When they became ill in May, they did not seek immediate help and both were subsequently diagnosed on COVID-19 tests.

The man said he “wished he had heard the health guidelines from the beginning” and hoped his wife would forgive him.
“This is a real virus that affects people differently. I can’t change the past. I can only live in the present and make better decisions for the future,” he said.
“She’s not suffering anymore, but she’s at peace. I’ve gone through times of missing her, but I know she’s in a better place,” he added.

Hitchens said he and his wife did not have a firm belief in the existence or effects of COVID-19.
Instead, they weighed up the ideas that the virus was a hoax, linked to 5G technology, or a real but mild illness. They came across these theories on Facebook.
“We thought the government was using it to distract us,” the man said. “Or that it had something to do with 5G.
But after the couple got sick in May, the man wrote a Facebook post that went viral, explaining that he was fooled by what he saw on the social network.

“If you have to go out, use your knowledge and don’t be a fool like me so that the same thing doesn’t happen to you as it did to me and my wife,” he wrote.
Doctors and experts have warned of the potential for indirect harm caused by rumors, conspiracy theories, and online health misinformation.
They point out that the dissemination of such publications remains enormous, especially as anti-vaccination theories grow.